If it prints successfully from Notes that tell us that you have a problem with your installation of Microsoft Office. In that case you may need to uninstall Office 2016 from your Mac and then reinstall it. See Troubleshoot Office 2016 for Mac issues by completely uninstalling before you reinstall. Small issue for mac.

Band of Horses is a band from Seattle, formed in 2004 by the vocalist Ben Bridwell. He decided to start a new band after the break-up of his previous group. There were no problems with finding new musicians, and soon Band of Horses began to play in Seattle. During one joint show with Iron & Wine Ben and the musicians of his band attracted attention of Sub Pop. Later the contract was signed and Band of Horses started to work in the studio. In 2005 they released their first EP titled Tour EP. First records were sold exclusively during the shows only and on Sub Pop's official website.

In 2005 the band started recording their first full-length album, and by 2006 everything was ready. The debut album was titled Everything All the Time and it received fair reviews. However, there were some changes within the group: soon after Everything All the Time was ready, Band of Horses got the new drummer: Creighton Barrett. The first single from the debut album The Funeral was used in many TV shows, computer games and advertisements. The band was gaining popularity, and in 2006 the musicians were invited to Late Show with David Letterman, where they performed The Funeral. By that time Mat Brooke had already quitted the band. He noted that he had never been a formal member. It all started when during one show Ben invited him to play couple of songs. Mat agreed, and later he even participated in the album recording. Brooke said that Band of Horses was first of all Ben’s project, and Mat wanted to see what he could do by himself. Thereby he started the band Grand Archives. They signed to Sub Pop and released two records.

The group’s second studio work Cease To Begin was released in 2007. At that moment the trio of Ben Bridwell, Creighton Barrett and Rob Hampton was the core of the band. Ryan Monroe played the keyboards. The album Cease To Begin turned out to be very successful: it was named 47th best album of 2007 by Rolling Stone. Also in 2007 Tyler Ramsey and Bill Reynolds joined the Band of Horses. In 2010 the band released their third studio work titled Infinite Arms. It was produced by the members of Band of Horses, with additional help from Phil Ek. Many musical magazines already gave the album good reviews, and the original sound of Seattle band will be enjoyed both by the old fans and by those who have not listened to Band of Horses yet.

Band Of Horses’ third record is very integral and organic. There are enough smart thoughts on Infinite Arms, arrangements rich in their sound, memorable tunes and of course faultless vocals with the widest range 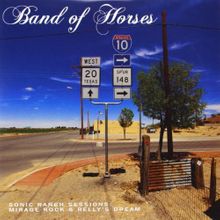 As a man steeped in Americana it’s no surprise that Ben Bridwell’s career has drifted audibly across the USA. By the time Band of Horses popped into existence he’d already lived in South Carolina, Arizona, Olympia and Seattle and each seemed to have a presence in his music: countryish and homespun, but with scrappy, indie character, Iron+Wine meeting the more gnarled end of Seventies Neil Young via ELO and Pavement. It was the two sides balancing each other out that gave those early records so much character and made, say, ‘There Is a Ghost’ so compelling, setting them apart from your common or garden Fleet Foxes, your Bon Ivers and your Midlakes.

Since moving back home to Carolina to raise a family, Bridwell has been gradually smoothing the Northwestern edges of his sound, while his band - once effectively a solo project - stabilised into a solid five-piece unit with the distribution and marketing might of Columbia records picking up from old label Sub Pop. Their breakthrough album, 2010's Infinite Arms, took those lo-fi beginnings and stretched them into something the mainstream could swoon over, gaining the band a huge global audience and the space and scope to follow, say, Kings of Leon as big players while crucially still showing traces of something rougher and more knockabout. Which brings us to Mirage Rock, the end point of a journey from north to south, from lone wolf to family man, from indie label to major muscle. And therein lies the problem - it’s not that Mirage Rock is by anyone’s definition a bad record, it’s actually a rather accomplished one, slickly made and smoothly played, but it is painfully easy to ignore.

It’s those rough edges that are missing. For most of its 40 minutes the record is a love letter to Seventies country rock, to Tom Petty, the Flying Burrito Brothers and the Eagles; less Crazy Horse, and more Crosby, Stills and Nash. It’ll probably sell by the bucketload but that’s not the point. That doesn’t mean we have to love it. Things start pretty well with ‘Knock Knock’, a sunny, carefree dash with a solid pop heart that harks back to Bridwell's best, a more bubblegum version sure, but a satisfying progression. It’s not sustained though- ‘How To Live’ grasps so desperately for FM Radio it feels like a needy girlfriend shouting “LOVE ME NASHVILLE, LOVE ME!”, while somewhere in ‘Slow Cruel Hands’ there’s the germ of something folkish and lovely lost when someone presses the ‘country by numbers’ switch about two thirds in.

The best of country, the best of Americana, hell, the best of Band of Horses has a strata of melancholy under the surface that is largely absent here. When it does come, especially on closer ‘Heartbreak 101’, or on ‘Long Vows’ where the slide guitar feels properly mournful and weepy, it’s a reminder of what Bridwell can do, of what could have been. Those touches of real heart are thin on the ground though, the larger part of the record is too slight to be really moving. Like the wallpaper in your house it can be pretty, fun, and makes a nice background to your life, but you’re rarely emotionally engaged by it.

When the band cut loose a little and mess with the formula things do look up. ‘Dumpster World’ swings along innocently enough and gets all grungey in the middle, and ‘Fued’ is a very welcome step back into that Pavementish lo-fi pop Band of Horses have always dabbled in, but really it’s too little too late.

This isn’t Cease To Begin, and of course it’s unfair to judge Mirage Rock for what it isn’t. All artists have the right to evolve, and across three increasingly slick albums we’ve seen this coming - If Bridwell and company want to shoot for the stars commercially then they’ve earned that more than most, good on them, we wish them well. There are those that will love this record, for whom it will be the gateway into earlier, richer work. But for those of us who have already been spellbound by what Ben Bridwell can create, this is simply not enough.