Following in the tradition of SimCity and Theme Park, Jurassic Park: Operation Genesis involves designing a dinosaur theme park from the ground-up and then maintaining its economic viability by keeping things safe and stable. Of course, that may be easier said than done when the 'attractions' include velociraptors, tyrannosaurs, and other fearsome creatures. In addition to creating the park, players are challenged to complete a series of 12 missions ranging from dinosaur control to enduring the ravages of nature.

There have been many games released over the years based on the popular Jurassic Park franchise, dating back as far as the classical 8-bit era. But as is the case with so many movie-to-game translations, these Jurassic Park titles were, for lack of a more brutal opinion, not so good. And then came the grand-pappy of them all, the one JP game that would irrevocably damper the enthusiasm of countless frog DNA fans, the PC game Trespasser. The now-infamous co-creator of the Xbox, Seamus Blackley, can be thanked for the game that was ludicrously hyped until the moment the first hand set finger to keyboard, at which point the game was exposed as the hey-I-can-see-down-my-female-character's-shirt simulator that it was. Hehe, Trespasser, yah, that game sucked. But you can only keep a good raptor down for so long before he instinctively lunges towards your jugular, or so the saying goes. Jurassic Park: Operation Genesis is the manifestation of a franchise phoenix reborn from the ashes, like fictitious dinosaurs borne from long-forgotten DNA lodged in an amber-sealed mosquito. Though not without its faults and blemishes, Operation Genesis serves up a healthy dose of dino-tainment in a fun strategy-oriented sim-osaurus package.

Since I've already pissed away any semblance of journalistic integrity with my blatant self-indulgent and somewhat retarded word-combinations, I might as well keep the fire burning. I wouldn't go so far as to say Operation Genesis is jurass-ariffic, nor would I say that it is ass-tastic. Somewhere between the two lies an accurate assessment. But somewhere in between is a place that this franchise has rarely been. So that alone qualifies Operation Genesis a landmark event; 'finally, a non-sucking Jurassic Park game!'. ('Doesn't suck' should be a bullet-point feature these days.) How did developer Blue Tongue achieve 'somewhere in between-ness', you ask? Basically they used the 'Jurassic Park concept' in a way that actually makes sense; a build your own theme park starring living attractions of the long-tailed Mesozoic reptilian variety. That's right, you'll design, build, and maintain a dinosaur theme park, recreating the epic undertaking that was portrayed in the first movie. That means you'll oversee and command everything from extracting dino-DNA from freshly procured specimens to piloting the chopper that will inevitably be needed to wrangle the rampaging product of your powerful and chaotic creations. Not to mention the rudimentary everyday tasks required to run a theme park like maintaining a clean environment, setting ticket prices, strategically placing customer necessities, amenities and attractions like restrooms, kiosks, and safari adventures, and researching new ways to improve the experience for the customer.

While the trappings of other sim theme park games are present, the main catch here is obviously the monstrous ancient beasts of destruction, which you can raise and release into the park for the amusement of human consumers. For every species of dinosaur you want featured as an attraction, you'll first need to assign people to archaeological fossil digs. Then you can use the genetic material that they've uncovered to splice together a particular dinosaur's DNA. The more genetic material you find for a specific dinosaur, the higher the quality will be for the finished product. Of course, this costs lots of money and as you get further into the game, you'll be required to spend some serious cash in order to produce the more popular dinosaurs, which will in turn attract more customers who like to gorge on dino-burgers and ogle at beasts who wouldn't hesitate to chomp their head off have they the chance.

Everything in Operation Genesis costs money, so you'll have to find a balance early on between charging sensible rates for customers and spending money within your bounds. You'll be able to modify the price for nearly everything in your park: observation areas, souvenir shops, food, ticket prices, and even bathrooms. Finding the right balance is a matter of studying customer reports, which give you an indication as to how you should modify the various prices for goods and services within the theme park. You'll also need to pay attention to what the customers think about the dinosaurs in your park. For instance, if your dinos don't have enough to eat via automatic feeding systems, then they will get sick, which isn't good for customer satisfaction since they paid to see some action. On the other hand, you'll want to make sure you keep your dinosaurs in check with suitable electrically charged fences and such.

Every dinosaur in Operation Genesis is unique not only in terms of size and shape, but in feeding habits, environmental likes and dislikes, etc. Luckily, the built-in dinosaur information system will fill you in on the various details of each type. It isn't hard to simply produce 20 carnivores and reel in cash on a consistent basis, but studying what kind of environments your dinosaurs prefer and implementing a suitable area for them to roam will boost sales considerably, so there is incentive to do some studying. Optimizing your park in this way is pretty time-consuming though, and it doesn't take long for this sort of micromanagement to get tedious. What makes understanding the intricacies of theme park management so necessary is the fact that you'll often be scrutinized by the board of directors who fund it, and they always want to see a healthy profit margin. The bottom line is the only thing considered by these people, and while this may be a realistic portrayal, it doesn't do much to enhance gameplay.

But the whole game isn't just about micromanagement and paperwork, you'll also have the option to pilot the dinosaur-assistance helicopter and manually tranquillize dinosaurs, or even hop in a Land Cruiser and tour your park via your custom made Safari Adventure and take pictures. These action sequences are a nice departure from the game's focus on strategy but truth be told, they are pretty pointless. You can just command someone to tranq an out-of-control dinosaur and it'll get done in no time, whereas when you manually pilot the chopper, it often takes a while to track down and snipe the dinosaur in question. Nevertheless, these are appreciated additions that help to keep the game feeling fresh.

Visually, JP:OG looks pretty good. The dinosaurs move in realistic fashion and, when left to their own devices, often evoke some pretty interesting animations. Textures are clean and crisp throughout and the various structures that you place are believably detailed. That said, the environments are fairly repetitive and the customer character models very simplistic. But since everything is rendered in 3D, and it is not uncommon to see dozens of characters on screen at any given time, it makes sense that the developers needed to optimize their usage of polygons. The camera system is smooth as buttah and very functional, allowing you to pan around the park, zoom in on a particular dinosaur, or zoom out to make a large chunk of the theme park visible. The music in Operation Genesis perfectly captures the spirit of the franchise, though the soundtrack's dependency on the original JP theme will burn you out on the track irrevocably. The sound effects are utilized in a very straightforward, no frills fashion and while the scarcity of beeps and bleeps may seem odd at first, it does actually help in terms of immersion since you won't be taken out of the experience due to an overabundance of distracting sounds. Mostly, sound effects come in the form of roaring dinosaurs, menu clicks, voice samples, and the obligatory ambient rumblings.

Overall, Jurassic Park: Operation Genesis is a noble attempt at revitalizing an aging franchise. The theme park concept is a great idea; to think that it took countless marketing geniuses so long to think of it is mind-boggling. The game is pretty slow-paced and outside of the few mentioned action sequences, is almost devoid of any visceral attributes that seem so inherent with flesh-eating dinosaurs. But if you have the patience to excel at the game, or are just a rabid RTS fan, then you'd be well advised to download Operation Genesis. 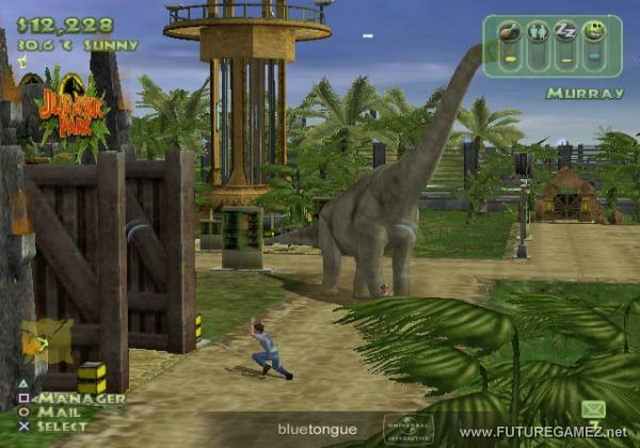