First I take the time to set the scripts that I want for my party members. Aldarion's script will include Frost Weapons for the time being so that his comrades will score more damage that adds up with each hit. I then speak with the Guard to go through the gates.

Some of the fights are fairly routine and easy enough. The first two fights against wolves involve simply using a Cone of Cold against incoming foes, and then letting the fighters go to work.

The video concludes with me heading south and then trying to help out a Dying Soldier whose men were ambushed by Darkspawn.

I return to the Wilds and continue a little south of where I previously found the Dying Soldier. A few Darkspawn are in view. The Hurlocks are closer to the party then the Genlocks, so I get rid of the Hurlocks first. I have Aldarion fire his staff and Daveth fire his bow so that each Hurlock is encouraged to come forward by itself as easy pickings. A Hurlock leaves behind one of the Vials of Darkspawn Blood that I'll need. After that I inch along carefully to the south so as to take out the Genlock Archers one at a time at a distance.

The Wilds Flower is within my view so I collect it. I then bring it back to the Kennel Master, who uses it to treat the Mabari Hound. I get an xp bonus for completing the quest. The Mabari Hound will join me some time later as a companion.

This video shows the completion of another side quest. I head south and a little west. I soon find the dead body of Missionary Jogby. I get a Letter from the body, which indicates that a chest may be found by following these directions:

The statues are in view once I start walking down the stone path. The problem is that there's a pack of Wolves behind the Statues, led by an Alpha Wolf. I tease the first two Wolves forward with long-range attacks so that I can kill them piecemeal. After that there will still be two Wolves and the Alpha Wolf left. I simply charge after them. Aldarion hits them as they're incoming with a Cone of Cold. The problem is that this tactic draws 'aggro' from the dangerous Alpha Wolf, who can kill a party member outright with its Overwhelm attack.

The chest itself will have a letter from Missionary Jogby's father, a random item, and the Chasind Flatblade (+1% melee critical chance, +1 armor penetration). The Flatblade is a Grey Iron Greatsword that Ser Jory equips on an interim basis, although Sten will use it afterwards.

A Pinch of Ashes

The party backtracks across the stone path. They then go south and east for a bit. What follows is a fight that can be quite difficult, as there are several Darkspawn waiting in ambush for me to cross a bridge. They are also led by a Hurlock Emissary. I begin by having Aldarion and Daveth use long-range attacks to convince the Emissary to flee temporarily.

Once he's gone I inch forward slowly until I can hear Darkspawn in the background. The sound means that Genlock Rogues are closing in for sneak attacks. Tvs thermal printer rp 3160 driver for mac. I wait for them to attack and reveal themselves, and then the party kills them off.

After that I can cross the bridge and charge the rest of the Darkspawn. Unfortunately there are leghold traps at the far end of the bridge. I can't disarm them either since Daveth doesn't have the talent needed for it. The other Darkspawn are still much easier without the Emissary though. Aldarion chips in with spells like Winter's Grasp or Cone of Cold when the situation is right for them.

A dead soldier's body has a Pouch of Ashes, as well as an Excerpt from Local Myths and Legends. From there I go north and up the hill. At the top of the hill is a pile of stones. I use the Pouch of Ashes on the Pile of Stones to begin the battle with Gazarath, an undead spirit with a lot of Health. He can use Leap to knock down an opponent, as well as Flame Blast. Aldarion chipped in as much damage as possible with his spells, but this of course has the effect of getting Gazarath into aggro. The aggro is, however, easily neutralized by Aldarion using his Force Field spell on himself. This allows the fighters to finish Gazarath off.

Gazarath leaves behind a Pile of Rags. Aldarion loots it for a pair of boots, the Fade Striders (+6 defense, Mages only). The boots provide a welcome upgrade for him. Incidentally, the fact that I can get Fade Striders here means that I don't have to buy the Fade Striders from the Quartermaster in Ostagar.

Last Will and Testament

I retrace my steps back across the bridge and then travel north. At some point I get attacked by a few Genlock Rogues that I kill in routine fashion. I then collect a nearby Elfroot.

Another wave of attackers will be arriving from the west, so it is important to take out the first group you see as fast as you can. Ser Jory was going to charge the incoming group all by himself, but I pulled him back. It is important to keep the party together as a team whose members stay close and can support each other. Aldarion exercises a little patience. He waits until several Darkspawn are in a line right next to the party's fighters before unleashing a carefully placed Cone of Cold spell. It becomes a mop up after that. On the gazebo itself will be the body of Missionary Rigby. I pick up Rigby's Last Will and Testament to start another side quest, and then loot any nearby containers or dead bodies. After that, I return to the dead bodies of the Genlock Archers that I had killed when I first entered the Korcari Wilds and loot them as well.

The next step is to travel towards the west side of the Korcari Wilds. There I find a large encampment of Darkspawn. The ensuing fights represent a variation on the drawing out theme. There are enough Darkspawn such that there is considerable risk in not leading the stragglers away far enough from the main force. If you don't lead them far enough, the main force may end up noticing you as well and charge forward.

So what 'drawing out' requires here is catching the attention of the stragglers, and then leading them on a chase away from the main force. Once all concerned are far enough, I can then kill them piecemeal. At some point there are only a few Darkspawn left in the encampment. That's when I can just charge in and kill them off.

In the middle of the encampment is a Hidden Cache that cannot be found unless Rigby's Last Will and Testament has been found beforehand. The Cache itself has Jetta's Lockbox. I could loot the Lockbox itself for some gems and the Beloved Amulet, which doesn't have any real use. I instead chose to hold onto the Lockbox in order to return it to Jetta, which won't be until much later on.

Signs of the Chasind

I open the nearby chest to loot the Mud Idol (+10% cold resistance) and Rigby's Field Journal. The acquisition of the Field Journal makes it possible for the party to follow the Chasind Signs. Simply look on the map, and x marks where a Chasind Sign can be found. It's a matter of walking up to each one and clicking on it. The first two are near the west encampment.

More will be found on the south side of the Wilds. But first, there are several more Darkspawn south of the encampment. Aldarion and Daveth pick off the Genlock Archers one at a time at a distance. The party retreats when a Hurlock appears and thus lures it away from the Genlock Archers. With ranged attacks I draw each of them away by ones and twos to avoid the Darkspawn ambush.

I continue to follow the Chasind Signs. I get ambushed by Genlock Rogues once in a while. They come in from all sides, so there isn't really any opportunity to use Cone of Cold. Aldarion tends to use Mind Blast in such situations, buying the fighters time to cut them down.

Once I've found all of the Signs I can then look for Chasind Cache itself, which is towards the southeast corner of the Wilds. The Cache itself holds three random items as well as :

Now I make for the edge east of the Wilds, travelling north. There are a few more Darkspawn to fight led by a Hurlock Alpha. Fortunately this group is fairly spread out, so I can pick off the stragglers at the front from a distance.

Once they're gone, it's time for the Hurlock Alpha and his odd helper. I have Alistair lead the charge so that he can safely absorb the initial approach of the Alpha. Aldarion hits them with a well-placed Cone of Cold. He then protects himself with a Force Field after the Hurlocks have broken out of being frozen. The Hurlock Alpha will leave behind several items including an Enchanted Dagger (+6 attack). The Grey Warden's Cache is towards the northeast corner of the Wilds.

Witches of the Wild

Here of course is the cutscene where I meet Morrigan and Flemeth for the first time. The pair gives me the Grey Warden treaties, and then Morrigan escorts me back to Ostagar.

Now it's time for me to join the Grey Wardens. 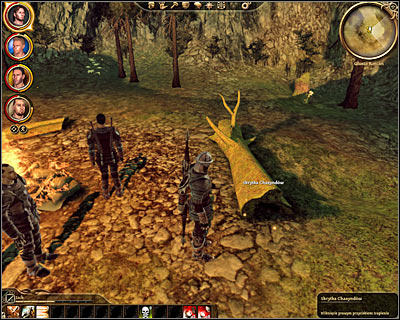