WITH ARPA AND AIS DISPLAY 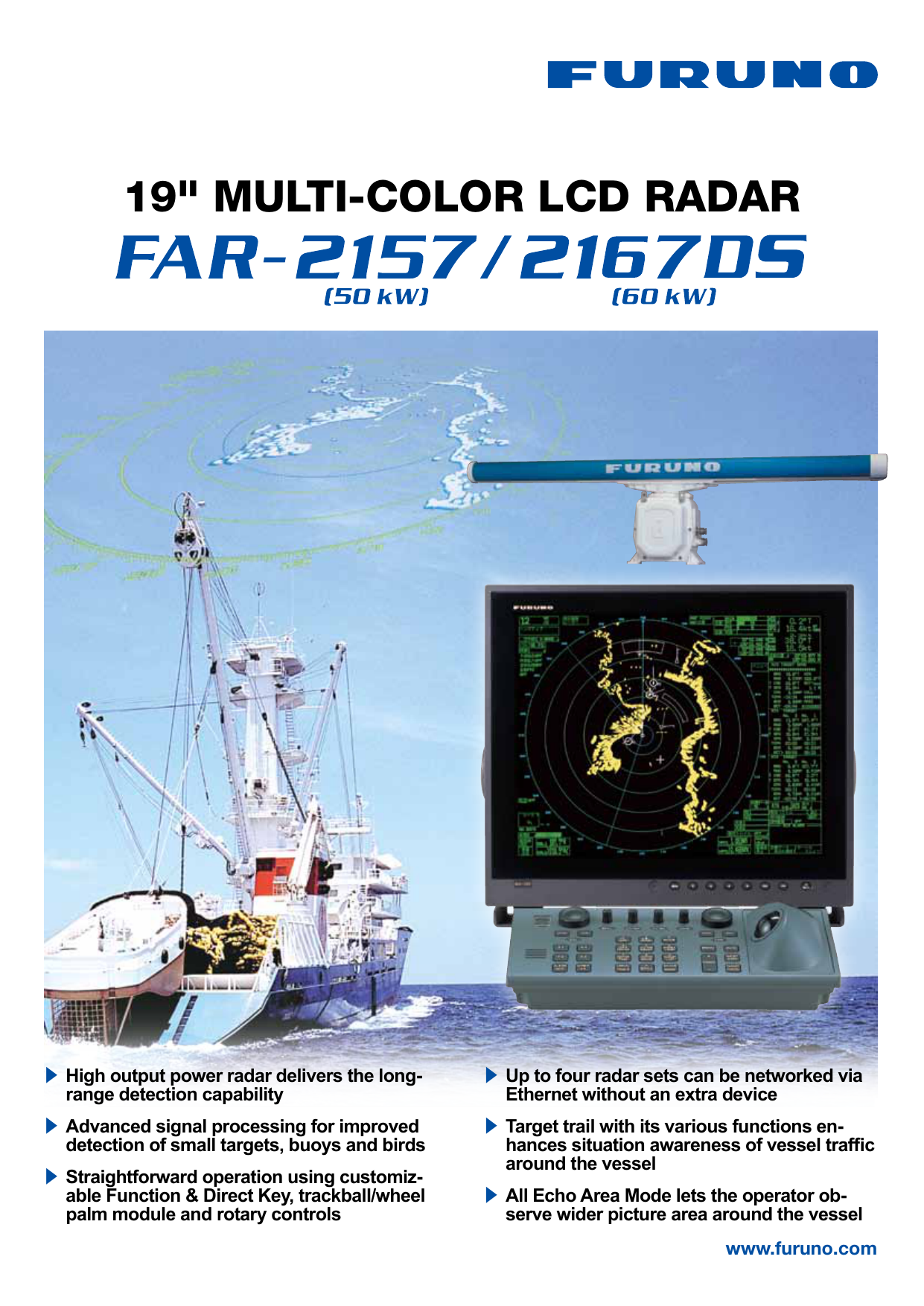 ■Designed to comply with SOLAS carriage requirements for all ships

The control head has logically arranged controls in a combination of push keys and trackball. Well organized menu ensures that all operations can be done by trackball.

the result of FURUNO’s 50 years of experience in marine electronics and advanced computer technology. This series is designed to meet the exacting standards of the International Maritime Organization

The display unit employs a 23.1” LCD which provides an effective picture diameter of larger than 340 mm. The SXGA monitor provides crisp radar images, which are presented in a selectable color with

a day and night background color for easy observation in all lighting conditions. Different colors are assigned for marks, symbols and texts for user-friendly operations.

Target detection is enhanced by sophisticated signal processing techniques.Two guard zones can be set at required ranges in any sector. Other ship’s movements are assessed by advanced target tracking software and alerted by CPA/TCPA data readouts.

The FAR-28x7 series can display AIS-equipped ships, when connected with an AIS transponder.

The radar antenna is available with 4, 6.5, or 8 feet radiator. For the X-band, the rotation speed is selectable from 24 rpm for standard radars or 42 rpm for HSC. The S-band radar is also available with the antenna radiator of 10 or 12 feet. The S- band radar assures target detection in adverse weather where an X-band is heavily affected by sea or rain clutter.

the electronic chart, L/L, COG, SOG, STW, etc. can be shared in the network.

Here is the list of antenna selection for FURUNO ARPA Radar FAR-21x7/28x7 series.

The 100 Base-TX Ethernet is utilized to network up to four sets of FAR-21x7/28x7 series radar with ECDIS FEA-2107/2807. This Ethernet data link gives high-speed and stable navigational data sharing amongst the equipment networked within the system. This network capability gives options to choose from a single station system configuration to complete Integrated Navigation System (INS).

The FAR-21x7/28x7 series radar delivers full TT functionality and can plot up to 100 targets. In addition, this radar series is displaying up to 1,000 targets received from the AIS transponder system. Detailed information about the targets can be shown in data cells on right hand side of the screen. TT/AIS information Scheme gives the operator full control over dense traffic. The type of AIS Symbol shows if it is a sleeping target, a normal target, a selected target, a dangerous target or a lost target.

COG/SOG vector changes its length with speed. ROT mark is viewable at the COG/SOG vector tip when a target has FURUNO Satellite Compass SC-50/110 or gyrocompass, which deal ROT serial sentence, installed.

Guard Zones generate visual and audible alarms when targets entered the operator-set zones. One of the Guard Zones can be used as an anchor watch to alert the operator when own ship or targets drift away from the set zone.

The target tracking symbol changes to a triangle when its predicted course violates the operator-set CPA/TCPA so that the operator may be notified of the approaching targets to the own ship for collision avoidance. The operator can readily change the vector lengths to evaluate the target movement trend.

Target trail feature generates a monotone or gradual shading afterglow on all objects on the display in order to help clarify traffic situation. Echo trails can be displayed in either true or relative motion (only true trail on TM). Relative trails show relative movements between targets and own ship. True motion trails require a gyrocompass signal and own ship speed input to cancel own ship's movement and present true target movements in accordance with their over-the-ground speeds and courses.

A radar map is a combination of lines and marks whereby the operators can define and input the navigation area and route planning/monitoring data. The radar map can include up to 20,000 points for lines and marks. The map data can be saved to facilitate repeated use on a regular navigation area. Planned routes created on ECDIS can be transferred onto a radar display when networked with ECDIS.

The control head has logically arranged operation Scheme through a combination of push keys and a trackball. Well-organized menus ensure that all operations can be performed with a trackball.

Trackball control head
Alternative to the Full-keyboard type or additional control head to be placed close to captain chair for remote operation.