I could spend months writing about “Civilization V”…yes, it’s that big of a game. I gave the base game a 9/10 in the review I published last year, but held off on buying any of the expansions due to financial reasons. Low and behold, Steam came through with a summer sale that allowed me to upgrade to the “Gold Edition” for a measly five bucks and catch the “Brave New World” for twenty. For those of you confused by all of the DLC the game contains, the “Gold Edition” includes all of the smaller DLC packs and the first major expansion “Gods & Kings”. Basically, everything up to “Brave New World”, which is the second major expansion in the series. For the sake of simplicity, I’ll be briefly touching on each of these two major expansions and providing my thoughts on each. I probably could have separated them both into two separate articles, but hey, it’s my blog and I’ll be efficient if I want to.

“Civilization IV” was well received for a lot of reasons, the inclusion of religion mechanics being among them. For purposes I can’t fathom, the developers removed religion from “Civilization V”. I honestly didn’t mind this approach as the game is still a mighty beast worth taming, but I was glad to see religion being reintroduced in the “Gods & Kings” expansion. While religion plays a major role in this expansion, military and combat mechanics have received a bit of attention too. Players will be able to make use of new units (27), buildings (13), civilizations (9), city-state types (2), and wonders (9) in their conquests. Those numbers don’t include the special units and techs found in the expansion’s three new scenarios.

Religion acts a bit like culture in that it is its own separate entity, complete with various bonuses depending on the faiths that you choose to adopt. In this expansion, there are about eleven different faiths to choose from. Unlike culture and combat, it does not have its own victory trigger. Rather, religion serves to compliment your civilization with various buffs, which are customizable depending on your needs. Faith is accumulated through various buildings (like culture) and those points can be used to purchase certain units, among other things.

Faith can be used to purchase certain buildings as well, like cathedrals.

In the early stages of the game, players will be trying to found pantheons (beliefs) and eventually, religions. Founding a religion involves choosing an icon and a name for it. Before you ask, yes, you can give it a custom name like “Dad’s Gaming Addiction-ism-ish-stuff” or just “Bob”. Once a player has established a religion, they’ll be trying to spread it far and wide through passive and active means. Why you ask? Depending on how you shape your religion, you might gain a certain amount of gold for each follower you have, just to name an example. Since more followers equals more free stuff, you’ll obviously want as many citizens to flock to your cause as possible. If you don’t want to go the economic route, you can instead shape your religion to accommodate your military or cultural needs.

Diplomacy and espionage make their way into the game, giving players more to think about when they decide to wage war and make peace. Like past “Civilization” games, spies generally serve to gather information on enemy civilizations and even steal their technologies. A well-timed spy mission could cause a city-state to switch alliances, though it’s a risky business and can result in your spy being caught and killed. Needless to say, this end result won’t win you any proverbial “Civilization of the Month” awards.

Combat has received an overhaul and for the better, I think. The game has shifted from a ten point scaling system to a one hundred point scaling system. What does this mean? Well, a unit that used to have ten health points now has one hundred. Instead of doing three points of damage, a unit might inflict twenty-nine. This system makes units last a bit longer, giving the player a chance to get attached to them. I can’t tell you how many units I lost due to some unlucky encounters / die rolls. Now I have a better chance to upgrade them and keep them alive. Naval units are now either melee or ranged, with the former being allowed to plunder / capture coastal cities if they are weak enough.

Where “Gods & Kings” focuses on military and religion, “Brave New World” addresses culture. Culture received a pretty big overhaul and introduces things like ideologies to the mix. Before touching on that, it’s important to note that this particular expansion introduces new civilizations (9), wonders (8), scenarios (2), gameplay systems (4), and a plethora of new units. I wasn’t big on culture in “Civilization V” and considered it more of an afterthought, but this expansion really made me consider changing my usual technological / military stance to one more focused on tourism…I’ll get to that in a minute.

Ideologies, if I could sum them up, are social policies that players will be trying to develop and spread throughout the world. In this case, you’ll have your choice between Freedom (Democracy), Autocracy (Fascism), and Order (Communism). Players will receive a prompt to choose one once they’ve reached the modern era or have built three factories. The ideology you choose will influence how others look at your civilization…like ideologies will be more friendly towards you, for example. You can’t go changing ideologies on a whim (not unless your public opinion is in the gutter), so choose wisely. Each of the three ideologies have their own tech trees to where players can purchase tenets, which act similarly to the social policies found in the base game.

Culture plays a huge role in this particular expansion pack.

Public opinion ties in with ideology and represents just how happy the people are with how you’re running things under that belief system. Public opinion decreases when other civilizations pressure your cities with their culture and tourism. As I mentioned above, if your public opinion drops too low, you may end up with cities that revolt and convert to the prefered ideology. Obviously, losing cities is something any civilization would hope to avoid. Switching ideologies when public opinion is low is possible, but you’ll lose any tenets that you may have purchased under that ideology’s tech tree. This makes tourism a mighty offensive weapon, as it allows you to apply pressure to neighboring cities and possibly acquire them, all without firing a single shot. Likewise, this makes culture a very important defensive shield, as it helps to stave off the cultural influence of other civilizations.

The World Congress, one of the ways a player can achieve a diplomatic victory, gives players more of a reason to lay out the “Welcome” mat. At a certain point in the game, all of the civilizations will be revealed and meet every so often to decide on important game changing decisions. It’s similar to what “Galactic Civilization II” did with the United Planets Council, if you happened to play that 4x space sim. Eventually, the World Congress becomes the United Nations. On a semi-related note, spies can be converted into diplomats, which serve to report how a particular civilization might vote on a key issue during the next meeting.

Use diplomats to see how other civs will vote on proposals.

Gods And Kings Of Egypt

Archeology finds its way into the mid-game, allowing players to dig up rare finds from events that occurred earlier in the game. Yes, you read that right. A battle that occurred thousands of years ago could potentially be a resource for your civilization via the archeology mechanic. I find that pretty darn cool, if you youngins even still use that word. They act a bit like wonders and great works in that they provide bonuses to the cities they’re moved to. Archeologists are now the only ones who can create landmarks, something that great artists used to have the ability to do.

Editor’s Note: Keep in mind that I didn’t cover everything found in both expansions, but those are the hi-lites.

Both expansions add a ton of depth to the game. Just when I thought the game couldn’t get any more complex, the developers find a way to make my head throb. That’s not a complaint mind you, but it does serve as a warning for the faint of heart who have no idea what they’re getting into. They both introduce mechanics that change the way you’ll play, and that can take some getting used to. Combat, for one. Battles take a bit longer, but make for satisfying victories should you come out on top. Trade routes become much more prominent in “Brave New World” and are necessary if you want to keep that economic competitive edge. While you can send trade caravans to your own cities and pick bonuses of your choosing, you’ll earn much, much more if you establish routes with another civilization. There’s a reason now to play nice…something I generally don’t do.

The one hundred point system also makes barbarians a pain to exterminate.

At first, I gawked at the price tag on both expansions. Both cost around twenty to thirty bucks at launch and with the core game currently priced at thirty (down from the full fifty/sixty dollar price tag), you’re looking at about a hundred bucks for all three. That’s a rather large investment for one game, but I can see why they are priced that way. There is a ton of new content in both expansions, moreso than a lot of other DLC packs I’ve seen floating around for five to ten bucks. The game is roughly two to three years old now, so the frequency of sales has increased as of late. I highly recommend picking both up during a sale, if you don’t have the money otherwise. Both are worthy additions to your collection and a must for serious “Civilization” fans.

Editor’s Note: I’ll let you figure out which is which. 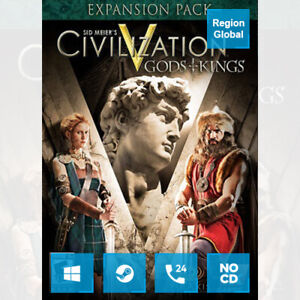 You can check out video play sessions here: