The Elder Scrolls III: Morrowind® Game of the Year Edition includes Morrowind plus all of the content from the Bloodmoon and Tribunal expansions. The original Mod Construction Set is not included in this package. An epic, open-ended single-player RPG, Morrowind allows you to create and play any kind of character imaginable.

@hope-franklin: That's because that island your referring to is called Solstheim, Witch is part of Morrowind and was also in morrowind, you could travel there, and the whole Dragonborn dlc is a massive refernce to Morrowind, Don't know where the scribs are, but whatever,

this sounds like the island dlc in ES 5, to be specific the dragonborn dlc with mirrac. sorry for bad spelling. 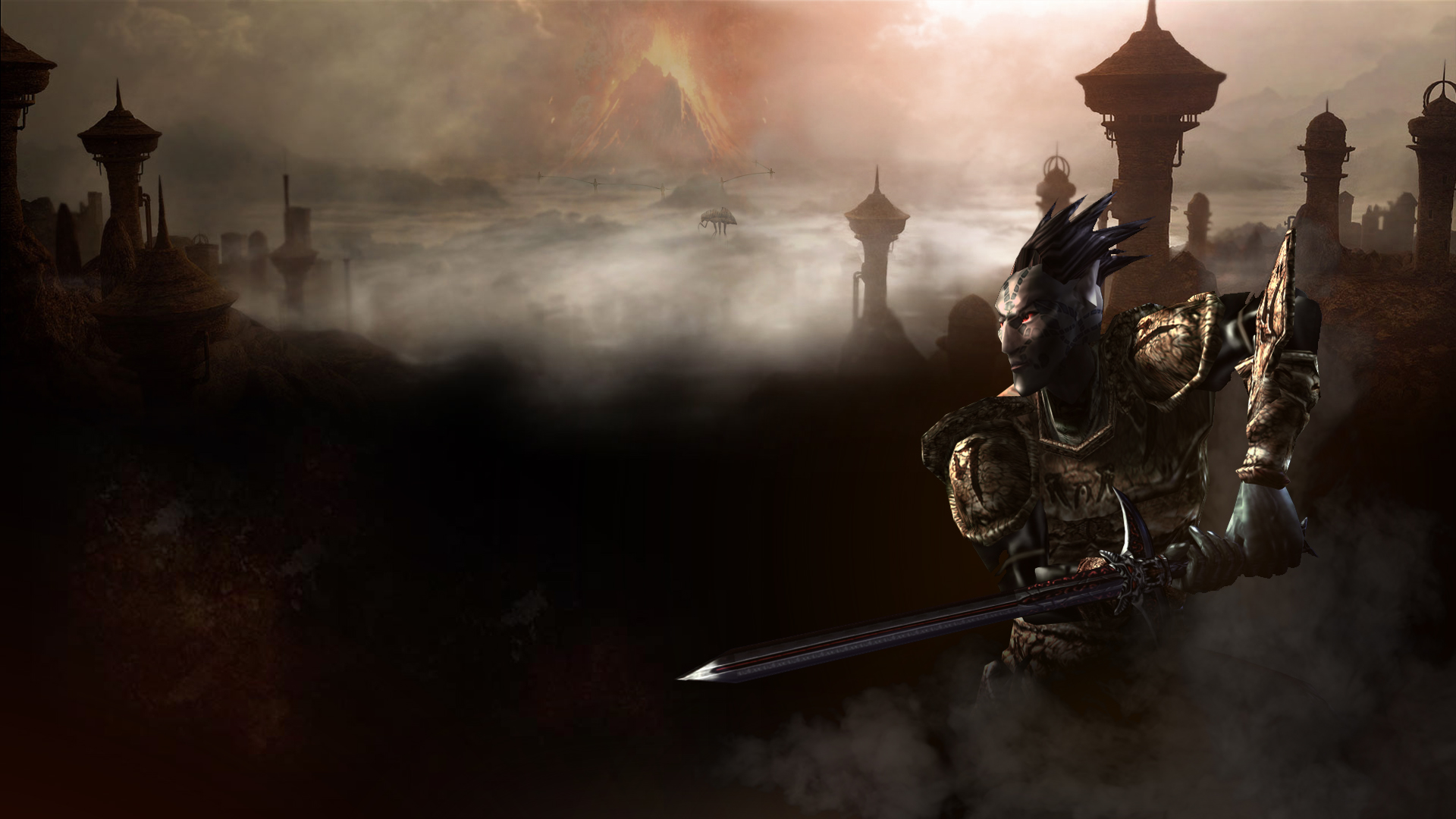 There was a time when the Elder Scrolls franchise wasn't one of the biggest names in the RPG genre. That all changed in 2002 with The Elder Scrolls III: Morrowind, the first Elder Scrolls game to be released on both computers and consoles (Xbox). The game continued the franchise's fascination with open-ended gameplay that placed few restrictions on the gamer's actions — you might choose to follow Morrowind's main plot or lose yourself in exploring the game's vast world and its myriad sidequests. One of the consequences of this approach was that, probably involuntarily, Morrowind came to embody the difference between more non-linear Western RPGs and the traditionally story-driven JRPGs. With more than four million copies of the game sold, very strong reviews and a slew of end-of-the-year awards, Morrowind remains one of the cornerstones of Western RPGs.

To score Morrowind's soundtrack, developer Bethesda Softworks called upon the services of one of Western game music's biggest names, Jeremy Soule. Although still a relatively young composer at the time, Soule had already proven himself an expert at writing music for fantasy games with his work on the Harry Potter and Icewind Dale games, as well for Baldur's Gate: Dark Alliance and Dungeon Siege. Morrowind would prove to be another steppingstone for Soule on his way to becoming one of the foremost composers for this genre of games. In a press release, Soule emphasised that the 'stunning epic quality of the Elder Scrolls series is particularly compatible with the grand, orchestral style of music I enjoy composing the most.' At the same time however, Soule was aware that due to Morrowind's free-wheeling nature, gamers might spend hours roaming a particular area in the game, similar to an MMORPG. Soule then chose to create a soft and minimalist soundtrack that wouldn't be too dominant during these long stretches of exploration, so the music wouldn't wear out its welcome.

This approach yielded mixed results, at least according to various game reviewers, who commented on the soundtrack's limited scope and on its overreliance on its main theme. Complaints were also levelled at the ambient, non-adaptive nature of the music, which failed to reflect the gamer's actions and current situation. Despite such criticism, Morrowind's soundtrack was nominated for 'Outstanding Achievement in Original Music Composition' at the Annual Academy of Interactive Arts & Sciences's Interactive Achievement Awards in 2003, where it lost out to Michael Giacchino's Medal of Honor: Frontline.

On album, Morrowind's music was first made available on a 40-minute bonus CD that came with the game's Collector's Edition. Soundtrack collectors eager to find out how well Morrowind's music played outside of the game were later given an easier way to satisfy their curiosity. In 2006, Soule released Morrowind's soundtrack via his online music store DirectSong. This new release presented the music in remastered form and added six minutes to the difficult-to-find physical album, effectively superseding it. This review refers to the original physical release.

So, are Soule's efforts for Morrowind as difficult to enjoy on album as during the in-game experience? Short answer: no. Fortunately, this is one of those rare cases where the soundtrack actually plays better outside of the game. First case in point: Morrowind's main theme. It's first presented on opening track 'Nerevar Rising' in obvious fashion. The track is effectively a series of presentations of the main theme, increasing in volume and scope as the melody is being passed from harp and flute to the celli, before a climactic finish on violins and full brass caps off the piece's development. It's to Soule's credit that the theme — essentially a simple three-note motif extended by two different secondary phrases — adapts well to all these different instrumental settings. The melody communicates lyricism just as much as an optimistic spirit of adventure once the orchestra cranks up the volume. This mellifluous quality comes to benefit the easily recognisable theme and helps it to adapt to other tracks' atmospheres, instead of blatantly putting its stamp on these compositions. 'Peaceful Waters' quotes the main theme briefly on flute and teases out its reflective character, while 'The Road Most Travelled' incorporates a rendition of the theme on solo cello into its lush textures. The melody plays equally well in the more energetic setting of Morrowind's battle cues, where the theme appears on flowing violins on 'Bright Spears, Dark Blood' and subtly referenced in the background of the second half of 'Dance of Swords.'

All these quotations of the main theme are fashioned intelligently and are inserted seamlessly into the flow of the compositions. It's a shame then that the theme only occurs regularly during the album's first half and then disappears — for good actually on the original physical album. If there's any issue with the main theme and Soule's use of it then, it's that the theme is actually underused and doesn't tie the soundtrack's second half together as well as the first half. Next to the main theme, there's a number of secondary themes which are specific to particular cues as a lightly-sprung but determined melody that's heard in various disguises throughout 'The Road Most Travelled'.

And what about the soundtrack's soft and minimalist nature? Good news here as well: Morrowind's music is anything but background droning. Instead, it's a rich score with pieces that develop formidably within their limited running times — ultimately the title's biggest strength. The album's compositions showcase fluid and expertly layered orchestrations that give every instrument section of the synth orchestra an opportunity to shine. Stylistically, it never goes beyond that classical fantasy sound that's been a mainstay of many games, with its rhapsodic and heroic strains. But on Morrowind, Soule applies this formula with an assured hand and the results are thoroughly convincing.

The album alternates battle tracks with more expansive compositions that seem to describe a scenery rather than actions. Its on these cues that the soundtrack develops a spellbinding pull and occasionally even a sense of grandeur that's most befitting for a world as large at that of Morrowind. Tracks like 'Blessing of Vivec', 'Silt Sunrise' and 'Shed Your Travails' are a well of soulful string melodies that don't fail to tug at the heartstrings, yet never sacrifice their noble air. Soule's talent for creating colourful, ever-changing orchestral layers is in full force on these pieces. The opening string melody of 'Silt Sunrise' is backed by increasingly complex orchestrations before calming down for a serene melodic statement, which in turn leads to a splendid conclusion over busy string ostinati and brass interjections. 'Shed Your Travails' and 'Caprice' calm down in their middle sections to include an ethereal female choir that instils the music with a real sense of wonder. On 'Shed Your Travails', this episode leads into an appropriately otherwordly, peaceful finish over glistening violin tremoli and a dying flute melody. 'Caprice', on the other hand, frames its spiritual interlude with light-hearted string ostinati and effortlessly segues from one musical extreme into the other. 'Blessing of Vivec' is just as beautiful and emotionally gripping as these cues, but remains more austere through its jagged solo cello lead whose cautiously ascending notes are a lot less flowing than most string writing on the album. While none of these tracks run longer than three-and-a-half minutes, they pack more development and symphonic drama into their running times than other compositions twice their length.

Morrowind's action material doesn't quite reach the same lofty heights, but it's convincing enough in its own right. Again, it's standard fantasy stuff: bold brass, driving strings and dramatic percussion. But Soule uses these familiar ingredients skilfully and presents them in well-composed shape. And his ear for details ensures these tracks merit repeat listens to tease out their intricacies, such as the rapidly descending violin ostinato figures on 'Dance of Swords' and 'Ambush!' Instead of using them to simply increase the tracks' rhythmic power, Soule places the cascading motifs between beats to create ear-catching, syncopated counterrhythms. Soule's penchant for constantly changing textures benefits the action tracks as well, even though their instrumentations are less colourful than those of MorrowindThe game jesus piece full album download. 's slower tracks. Frequently, Soule casts his battle cues in an ABA structure that sees these compositions calming down in their middle section after a dynamic start, before ramping up the volume again towards the end. This change in tempo and texture is quite transparent, but helps to pace these cues and avoid monotony. And Soule makes sure that tension never sags during these quieter passages through the inclusion of lighter rhythmic elements such string pizzicati, hand percussion and tinkling piano notes.

All these positive qualities help to overcome the biggest criticism one could level at the battle cues: that their sound isn't powerful enough to allow them make their full impact. To a degree, this ties in with Soule's declared approach of not trying to overwhelm the listener with his music in-game. And make no mistake, the majority of Morrowind's action tracks are energy-laden enough to satisfy, even though you sometimes wish the percussion elements would have greater presence. But it's only once Soule's strips back the many layers of his compositions and focuses on the primal qualities of repetitive rhythms that things start to sound less promising, for example on 'Drumbeat of the Dunmer' and 'Stormclouds on the Battlefield'. The only thing that the minimalist rhythms of 'Drumbeat of the Dunmer' could have going for them is a resonant, forceful sound, and Morrowind fails to provide this. In general, the album sounds somewhat dull and compressed, with the effect that the detailed orchestral textures, particularly on the colourful slower tracks, aren't always rendered with a desirable level of clarity. Orchestral climaxes that should soar occasionally have their wings clipped, and the sustained double bass chords on 'Over the Next Hill' have way too much presence and muddy the soundscape. Sure, this is a synthesised soundtrack from 2002, but there are enough better-sounding albums around from the same time to suggest that Morrowind's acoustic appearance is hardly reference quality.

With The Elder Scrolls III -Morrowind- Special Edition Soundtrack, Soule further cemented his elevated standing among Western game music composers. The album impressively displays why Soule would come to be regarded as a specialist for scoring fantasy games. Particularly the more measured tracks on Morrowind are beautifully orchestrated and splendidly developed, to the degree that they sometimes feel like mini-epics convincingly compressed into three minutes. To a slightly lesser degree goes for the soundtrack's battle tunes, which are nicely varied in their textures and filled with intricacies, particularly when it comes to their rhythms. All the way through, Morrowind exudes that wondrous, yet bold feeling of high adventure that's so indispensable for a fantasy score of this character, captured in the score's strong but slightly under-used main theme.

Unless you insist on listening to your scores in a lossless format, the physical release of Morrowind's score is superseded by the digital version. The disc lacks the remastering and bonus tracks of the digital version, and ends particularly underwhelmingly with 'Drumbeat of the Dunmer'. That all said, fantasy score enthusiasts should not hesitate to purchase a version of this soundtrack.